All comments should follow the RIGs, and will not be approved if they contravene this. For more information, go to https://www.bcteal.org/wp-content/uploads/2019/07/BCTEAL-RIGs-CC-watermarked-big.pdf

The views expressed in this blog are those of the authors and do not necessarily reflect the policies of BC TEAL.

Happy 75th to #CdnELTchat! When Nathan Hall (@nathanghall) and Svetlana Lupasco (@StanzaSL) started #CdnELTchat (also known as #LINCchat) in 2015, I taught evenings as a LINC instructor, and I had been feeling a bit isolated at the time. #CdnELTchat gave me a chance to connect with other Canadian ELT educators. I feel very fortunate to have the opportunity to be a part of the #CdnELTchat team and community of practice.

I would like to echo my gratitude to #CdnELTchat enthusiasts by quoting Claudie’s (@thespreadingoak) tweet, “Thanks ALL the dedicated generous participants who made this a viable authentic place 2 share EAL/ELT/ESL knowhow, enhance practice, give moral support.Onward and upward.”

If you are interested, take a look at the topics #CdnELTchat has covered in the previous 75 chats: #CdnELTchat Topics (2015 to present). What topics are you interested in discussing for the next 75 chats? Help us out by sharing your ideas on our Padlet: Questions and Comments for future #CdnELTchats.

We were fortunate to have Nathan Hall (@nathanghall) join us for the 75th edition of #CdnELTchat to talk about Authentic Listening Materials. Nathan is an EAP instructor and teacher trainer at Douglas College (@douglascollege). Visit his fantastic website (https://nathanghall.wordpress.com) for a variety of resources and ideas. Nathan started the discussion by sharing Morrow’s definition of an authentic text: “a stretch of real language, produced by a real speaker or writer for a real audience and designed to carry a real message of some sort.” (Morrow, 1977).

Here are the questions we used to guide our discussion:

Q1: What are the advantages of using authentic listening materials? #CdnELTchat

Q2: What guidelines should we follow when we choose authentic listening materials to use with our class? For example, what should the optimal length be for an authentic audio or video clip at different proficiency levels? #CdnELTchat

Q4: How can we use authentic listening materials for assessment? #CdnELTchat

Q5: What specific listening strategies should we teach students before we use authentic listening materials?  #CdnELTchat

It was a busy chat with participants from across Canada and beyond sharing almost 200 tweets. You can read all the tweets from the chat on Wakelet, but here are some highlights from the discussion:

We encourage everyone to continue the conversation using the hashtag #CdnELTchat. Here are all the great questions that we didn’t have time to discuss during the live one-hour chat:

The April 17 #LINCchat was all about listening skills and strategies. #LINCchat is not just for #LINC instructors; we discuss topics of interest to everyone teaching and working in English Language Teaching (#ELT). Thanks to @BCTEAL for posting the summaries here on the BC TEAL blog. Svetlana Lupasco (@StanzaSL) for keeping the questions coming during the chat. And thanks to all the participants and people who followed the hashtag and added to the conversation during and after the chat. You can grow your Personal Learning Network (PLN) by following these educators on Twitter.

Remember that there are many ways to participate in a #LINCchat. You are welcome to lurk by following the hashtag if you’re not comfortable participating in an online chat. You can search for the #LINCchat hashtag anytime on Twitter and read all the tweets there. If you’ve never been part of a twitter chat before, you can read all about How to Join a Twitter Chat right here on the BC TEAL blog or by visiting www.lincchat.ca. You also follow the threads of the conversation in the summary below. To read the summary, hover over the Twitter bird under the questions in the image below. Bonnie Nicholas (@EALStories) created this interactive image using Canva and Thinglink.

The #LINCchat team will be at the BC TEAL Conference on May 5! If you’re at the conference, we’ll be talking about Building Communities of Connected Learners and Educators using Twitter during the #edtech jam on Saturday afternoon. We’ll also be holding a special Saturday #LINCchat on building your #PLN during our session. Please join us at 1:30 Pacific, 2:30 Mountain, 3:30 Central, 4:30 Eastern, 5:30 Atlantic. 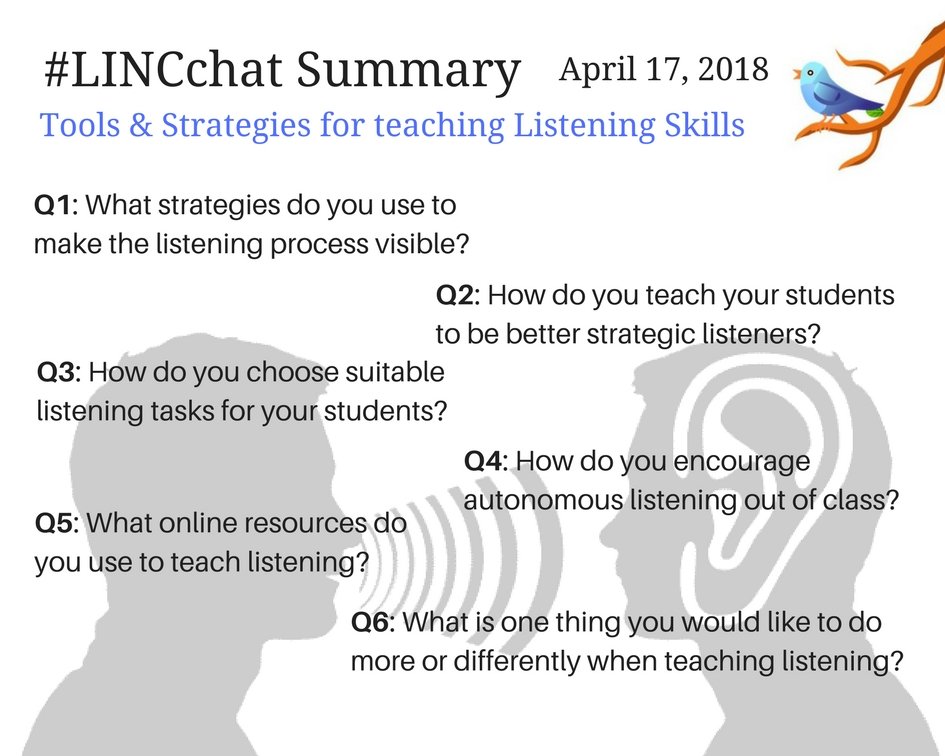 Bonnie Nicholas (@EALstories) is an enthusiastic participant in the bi-monthly #LINCchat as well as a member of the #LINCchat team along with Svetlana Lupasco (@StanzaSL), Jennifer Chow (@jennifermchow), Augusta Avram (@LINCInstructor), and Nathan Hall (@nathanghall). Bonnie teaches LINC at NorQuest College in Edmonton.

For a BC TEAL member and supporter like me who has often benefited from the PD events organized by the association, the decision to attend this year’s BC TEAL Lower Mainland Regional Conference was an easy one. The theme, “Rethinking Communication: Trends, Tools and Strategies”, also held great promise, since as language professionals we need to keep pace with the ways language itself changes and evolves and stay informed about the realities of our learners and their communicative needs. The Conference took place on Saturday, November 18th, at Columbia College. My choice of presentations to attend was clearly guided by my interest in the impact of technology on the ways we communicate and teach. It was a great learning experience, and I would like to share some of the highlights here.

My morning started on a high note, with Nathan Hall’s “Unscripted: Releasing the Potential of Authentic Listening in ELT”, delivered with his usual contagious enthusiasm. Nathan is a teacher trainer and EAP instructor for Douglas College and a Community Coordinator for Tutela, to mention just a few of the many roles he fulfills. As expected, I left with a list of technology tools and practical suggestions to put to good use in my class. The issue of using authentic listening input with language learners has always been controversial, even though both teachers and linguists will agree that comprehending “natural, real-time language use…is the target of virtually all language learners”(Michael Rost, 2011). When opting for purpose-written materials that are graded and scripted, however, teachers need to remember that these usually simplify syntactic structures and vocabulary, and sometimes use a reduced speech rate(Field, 2008). Authentic material can be used though, even with lower level learners, if the right task is used. Nathan introduced nine types of listening tasks(Vandergrift & Goh, 2012) that teachers can choose from when using authentic material: Restoration, Sorting(use information in a text to sequence, categorize, or rank items such as jumbled up texts and pictures), Comparison, Matching(listen to a number of short texts and match each one with the most appropriate theme given), Jigsaw Task, Narrative Completion, Embellishment, Evaluation, and Reconstruction. As promised, tech tools were also introduced and reviewed. VLC for example, is a free and reliable multimedia player that you might want to install on your computer. If you are tired of ads when watching videos, you have the choice of SafeShare.tv Are you a MAC user who wants to record a screencast video? All you have to do is open Quick Time. I encourage you to explore all of them here nathanghall.wordpress.com

The keynote speech, “Language and Social Media: Opportunities for the EAL Classroom” was delivered by Dr. Maite Taboada, Professor of Linguistics at Simon Fraser University. Her research areas are discourse analysis and computational linguistics. The speech started with the question, “Is the internet ruining the English language?”, followed by a resounding NO. We were reminded that language is creative and ever-evolving and, also, that understanding and being able to function in different registers is part of language learning and use. For a register approach in the classroom, which is a well established teaching approach, Dr. Taboada recommended a few resources, her favourite one being, “Discourse in English Language Education”, by John Flowerdew. It was explained that the online registers have developed to reflect the realities of a new form of communication brought about by the online medium, and they often display characteristics from both oral and written language. Interestingly enough, some of the language features they display and which people often point to as proof of “ruined language” are nothing new. Take alternative spelling, for example. To our surprise, we learned that OMG was first used by Winston Churchill, in 1917. LOL. In terms of opportunities to include social media in our EAL classrooms, Dr. Taboada believes there are quite a few: social media can be presented as a tool to communicate or can be used to introduce language activities, such as lower-stakes writing, with an emphasis on intelligibility over accuracy. Students can be asked to rewrite the same content in different media (write a blog post, a tweet, a Facebook status update), for example. They could also practice writing or speaking in different registers by writing a wiki entry or producing a podcast. Another very interesting point was made about the fact that social media users seem to interact differently across various social platforms, and people often wonder why we are “so nice on Facebook, so nasty on Twitter, and so ‘braggy’ on Instagram”. An analysis of the interactions taking place on these social media platforms using mainly the concept of register as defined by Systemic Functional Linguistics seems to provide a valid explanation. The last part of the speech was an introduction to Dr. Taboada’s research. We learned how sentiment analysis, which is automatic classification of texts based on subjective content, can help determine if online reviews and comments are positive or negative. One of the goals is to build a tool that can identify constructive comments and filter out toxic ones, especially hate speech. You can watch the recorded keynote speech here:

Anything that has to do with collocations is of great interest to me, so, attending “Using Online Tools to Improve EAL Students’ Written Communication”, delivered by Deogratias Nizonkiza, instructor at Douglas College, was a must. How many times have we heard our students say, “do a mistake” instead of “make a mistake”? Teaching collocations explicitly could be the answer to this type of problem. If I were to choose just one of the definitions shared by Deo, I would probably go with the one from the Oxford Collocations Dictionary for Students of English, “the way words combine in a language to produce natural-sounding speech and writing”. Their importance is widely accepted in EAL contexts, and students trained to focus on collocations instead of individual words have a higher chance to fluently produce native-like utterances that are grammatically correct (Nation & Chung 2009). A number of typical language exercises can be used to raise awareness and help students practice collocation use, such as matching(verbs & nouns), underlining the verb(do/give/make me a favour), or inserting the collocation to complete the sentence. It is also useful to teach students the most common collocation types, such as adjective+noun, verb+noun, verb+adverb, etc. However, if we want the students to develop routines in their work with collocations, especially in the case of students with intermediate or advanced knowledge of English, we should probably teach them how to use corpora and online tools. Here are the tools Deo recommended: COCA; Word and phrase; Ozdic; Lextutor. Some of these tools, but not all, are rather sophisticated and can only be used by students with advanced knowledge of English. Ozdic, however, was rather enjoyed by my LINC 6 students. In the second part of the presentation, Deo shared the research he conducted at McGill University to investigate to what extent ESL students perceived corpora and online tools as useful for improving their academic vocabulary and for editing texts. The results were positive, which will hopefully encourage more teachers to give the deserved attention to collocations.

The decision to attend the conference came with the full reward of learning new things, having a chance to reflect on my own practices, and, not in the least, connecting with other passionate professionals and being energized by it. I am sure others felt the same; one lucky teacher even went home with the big prize, an iPad!